It is expected that very prominent people in society who support the Youth agenda such as Comrade Kwesi Pratt Jnr (Editor of the Insight newspaper and Director Pan African TV), Mr Kwame Sefa Kayi of Peace fm, Mr Bernard Avle, General Manager of Citi TV and ALHAJI IRBAD IBRAHIM Security consultant and Election 2020 Peace Ambassador and under the distinguished patronage of the Ghana Armed forces who are going to be present at the event. The program will be held at the Golden Tulip Hotel Accra on the Friday 18th June 2021 at 1:30pm.

Leading Aircraftman (Lac) Mensah Adukpo Prince was born to Mr and Mrs Adukpo in Tsawenu, a suburb of Awudome, in the Volta Region of Ghana. He had his primary education at the Tsawenu L/A Primary School located in the Ho West District of the Vol ta Region. He continued to Blessed Generation International School where he sat for the Basic Education Certificate Examination.He proceeded to Wesley Grammar School, where he read General Arts.

He sat for and passed the West African Senior School Certificate Examination (WA SSCE) in 2008 and successfully gained admission into the University of Ghana, to pursue a Bachelors’ degree in Psychology with Sociology. He was in the University when he got the opportunity to enlist into the Ghana Air Force Recruit Training School in Takoradi to be trained as a soldier. He later graduated with an Executive Certificate in Security Intelligence and Forensic Studies from Knutsford University, Legon.

Having gained the requisite experience and exposure, after six months of Basic Military Training, he passed out into Ghana Air Force with fIying colours and was adjudged the best in Academics and as the Overall Best Recruit in his intake.  he participated, and won the ultimate award, in the “Chief of Defence Staff’s Prize Essay Competition” organized for all Soldiers of the Ghana Armed Forces, serving both at home and abroad in 2018 and 2020. Mensah Adukpo Prince is a vibrant young man whose deep knowledge and vast experience is derived from having served in different capacities of leadership.

He has also participated in several Seminars and Workshops and taken quite a number of Online Courses.He began his leadership roles as early as in his Basic School, where he served as the School Prefect. He continued in his leadership roles at Wesley Grammar School, where he served as the Senior Boys’ Prefect asWell as the SRC President for 2007/2008 academic year. He also served as the Script Editor of the Drama, Debate and Creative Writers’ Club of Wesley Grammar School. He also served on the Academic Board of the Pentecost Students and Associates. He was the Regional Coordinator of the Greater Accra Regional Students Representative Council in 2011.

He is currently serving in the Ghana Armed Forces as an Air Traffic Control/operations Clerk. If he’s not reading or surfing the Internet, then you will find him watching movies. 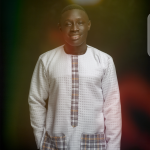 You may have missed

Joe Mettle Ft MOG Music – They That Wait (The Experience)