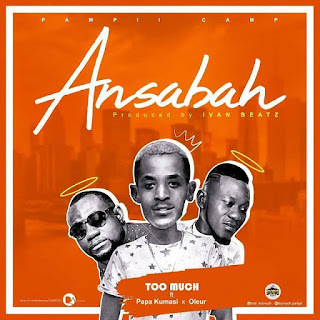 His previous track Junka  town ,has gained massive airplay around the world and has also been dubbed, as one of the finest songs by many entertainment pundits

With the release of ANSABAH ,its sad to say that TOO MUCH’s year of making hits and taking names isn’t showing down anytime soon.

TOO MUCH has made a name for himself beyond the electronic music scene in the last few years . The Junga  town based artist has made hits after hits through his film making with Alaska ,Yoghurt and Atemuda, the bass brothers have also annihilated dance floors all over the country

We highly recommend you to save the first listen for a pair of good over ear earphones “Apocalypse” is minimalistic yet sophisticated– the underlying composition is straightforward, but the richness of details and heavy sensibilities radiate through their unparalleled production skills throughout the track

Keep your eyes here and be the first to download the song.