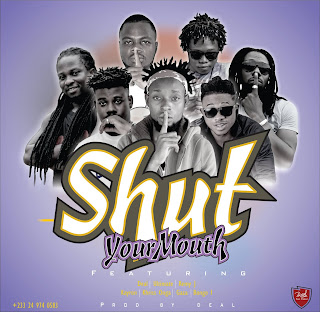 “DEAL” RELEASES COVER PHOTO FOR HIS NEW , “SHUT YOUR  MOUTH”

“The official cover art for the much awaited all star project “Shut Your Mouth” (SYM) which features the hottest voltarian artists such as ‘Deal’ ‘Remy J’, ‘Kayron’, ‘Ultimate’, ‘Khriss Onga’, ‘Gaza’ and the host of the burning reggae show, ‘Bongo I’ has been released!

Looking at the lined up artists, no need to tell the fire in this song!

SYM is being produced by Deal and yet to be worked on by different sound engineers so as to maintain standard!

The most anticipated song is said to be released early April