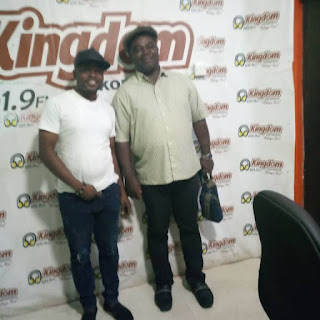 Staunch Ghanaian radio broadcaster and fashionista, Albert Johnson, known in the industry as Odeefour has stated he was the first presenter to host midmorning show in Ghana.

According to the Ace Broadcaster, his boss who was the CEO of VIBE FM, Mr Michael Cork gave him 30mins to start such a programme because, there wasn’t any programme in the system like that and those days the existing radio stations were using only English Language to run their programmes. So he started it with GA language and later changed it to Akuapem Language and his boss was impressed with it.

Mr.Johnson add, from there his time was changed from the 30mins to 2hrs which is from 10:00am – 12:00pm and as time goes on it increased to 4hrs and people were enjoying the show with different languages because at that time no commercial radio stations were using different languages apart from only RADIO ONE.

He was speaking in interview with NANA YAW KUMI JUNIOR popularly known as LONDONA on Kingdom FM’s Saturday programme (PIMPINAA) whiles Kumikasa.com was doing the monitoring.

Mr.Albert Johnson continued say, he started the Journalism work between 1994 and 1995 and did internship for two(2) years and it wasn’t easy but through determination and hard work he was able to make it and now MIDMORNING programme has come to stay forever.

Albert Johnson, popularly known as Odeefour in the creative arts industry was the first person to Speak Twi Language on commercial radio in Ghana (private radio).

He commenced his radio broadcasting in the year 1995 with Vibe FM 91.9. He also worked with Kesewa FM in 2006, was the marketing and events manager, before proceeding on to Melody FM as General Manager, Rock FM, all in Takoradi in the Western Region. He later joined Anigye FM as the General Manager.

In Accra, he first worked with Adinkra FM and he is currently with Atinka FM as the Entertainment show host from 2-4pm on Saturdays.

Odeefour is not only into radio but also is into fashion designing, interior decoration, customologist, event management and a professional MC.