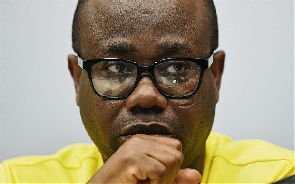 neral News of Mon, 28 May 2018
Anas exposé: Nyantakyi gave Akufo-Addo’s hotel room number out to investors?
Kwesi Nyantakyi, Ghana Football Association boss
It has now emerged President of Ghana Football Association, Kwasi Nyantakyi gave out the hotel room number of President Akufo-Addo whilst on a visit Doha, to supposed investors in Morocco.
Outspoken Member of Parliament for Assin Central, Kennedy Ohene Agyapong, who disclosed this says the GFA President whom he claims was bragging, also told a team of undercover journalists who posed as businessmen he had the Doha phone number of one Asenso, who is believed to be Deputy Chief of Staff.
He revealed President Akufo-Addo may have entangled himself in the whole episode if a suppose call from Mr Nyantakyi to introduce the businessmen to the former had gone through.
“President Akufo-Addo that I know, if businessmen of that stature that he [Mr. Nyantakyi] claimed were coming to see him, he would have waited. It means Nyantakyi’s call did not go through. He was just deceiving the people to take money,” he revealed.
The maverick businessman cum politician, is the latest to join calls for undercover journalist, Anas Aremeyaw Anas, and his Tiger Eye Private Investigative team’s latest exposé on football and politics to be stopped from being premiered.
ADVERTISEMENT
Mr Agyapong told Net 2 TV Dialogue program that, Anas should be stopped from going ahead with the intended premiering of the documentary because he disagrees with the approach used by the investigative journalist.
“You want to premier this? We have to stop him or else, he will end up one-day recording you whilst you are asleep with your wife and premiere it in public,” he told host, Abedi Anim on the show.
The documentary is expected to be premiered in Accra on 6th and 7th June whilst similar events are scheduled for 9th and 10th June in Kumasi with Tamale and Takoradi events slated for June 13 and 16 respectively.
ADVERTISEMENT
President of the Ghana Football Association, Kwasi Nyantakyi was on Wednesday arrested over fraud allegations.
It follows a complaint by President Akufo-Addo to the Criminal Investigations Department of the Ghana Police Service that the FA boss was using the President’s name fraudulently.
The president watched excerpts of an investigative piece by the journalist dubbed “Number 12” in which Mr Nyantakyi was seen allegedly negotiating for an amount of money using the name of the president.
He has since been invited by the police.
ADVERTISEMENT
According to Mr Agyapong, little hesitance from the Presidency in inviting the supposed investors to the Flagstaff House further saved the day for President Akufo-Addo.
“What shows that Nyantakyi would have given the money to Akufo-Addo or Bawumia,” he quizzed.
“But the impression would be created that he collected the money for them because it is his word against that of everyone.
” It would have been very, very dangerous but because it was a setup and their focus was on Nyantakyi, they did not extend it and they couldn’t have that money to go and pay; to go and destroy the government,” he stressed.
Asked if the scandal could give President Akufo-Addo a bad name, he answered in the negative.