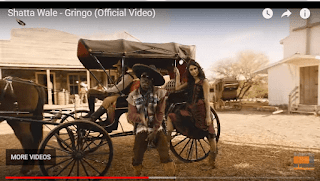 1.Zylofon Flew A Team From Ghana To USA to shoot this video.

Yes we all know how much it costs to buy a ticket from Ghana to USA and Zylofon did not just pay for Shatta Wale’s tickets but also that of other Zylofon staff. We saw Bulldog make a cameo appearance in the video and we saw also about 2 or 3 Zylofon workers on set when the behind the scene pictures were released. They also used the Nigerian music video director Sesan, so Zylofon would bear the cost of all these people. I’m sure Sesan would have also gone with his assistance as well. Moving from their hotel to the location, would also come with it’s own cost. It’s likely about $12,000 was spent on flight tickets and moving from hotel to location.

Yes, the video was shot in the USA so, it’s not likely Sesan would have moved all of his equipments (maybe he would take one camera along). So they rented cameras, lights, sound, rigs and looking at the quality of the video, it’s obvious the best of cameras were used in shooting. There were also an extra crew to handle shooting, lighting, stunts, etc so a crew was hired again to assist Sesan who was the main director. Sesan was the main director and would also charge. Zylofon is likely to have spent  not less than $60,000 in paying the director, renting other equipment and additional crew.

3. Paying The Cast For The Music Video.

Yes, we saw new guys in the music video and we assume they are actors/actresses even if not professional ones. They would definitely not have  been on set for free. Some monies was paid to get them play the roles. We can say there were lead characters like Jasmine and Snake Eye, so they would take more than the others. Zylofon is likely to have spent $6,000 on paying the cast.

Yes, Zylofon must have paid for the location they used in shooting the music video unless of course, someone knows the owner and they were able to get it for free but we don’t want to assume anthing. They paid for using the location and the props you see in the video plus the costumes used. Well, it’s hard to give an estimate on this one, but I know they might not have spent more than $3,000 on location and props.

So, in making your budget for a film, you have to cater for food for your cast and crew, and if hotels will be used, you pay for it as well, then also there’s has to be insurance cover for all of the actors ( I know in the USA, there are strict laws but not soo certain if they paid for it or not).  This total cost wouldn’t be more than $5,000.

So there you have it. This should give you a fair idea as to the elements of the cost in shooting the Gringo music video and why people say it’s expensive. If it had been shot here in Ghana, they would have saved money, as some of the costs would have been avoided and as far as we know, Shatta Wale has not spent more than $20,000 on any of his music videos yet, which is why this one is tagged as his most expensive music video yet and I think the huge budget Zylofon made for the video is worth it as everyone can attest to the quality in the production of this music video.

Perhaps, Nana Appiah Mensah decided to take up the cost, which is why he was credited as the Executive producer and not Zylofon Music.

Also note that, the figures I gave are my estimates and not EXACT but that should give you a fair idea on how expensive it cost to make that music video.