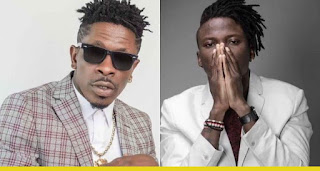 Dancehall artiste Shatta Wale is arguably the most popular in the country now. He commands the news headlines and fills show venues like no other.

It is therefore safe to assume that he is the most popular artiste in the Dancehall genre.

But lately, his rival in the Dancehall arena, Stonebwoy has been rubbing shoulders with him when it comes to popularity, especially in the media.

Before now, Stonebwoy was considered to miles behind Shatta Wale but it seems the ‘Hero’ hitmaker is bucking up in that line.

And it has all happened within the period when the two have been at each other’s throat in what is described in showbiz circles as ‘beef’.

YEN.com.gh has chronicled some of the few moments within this year (2018) that Stonebwoy has dominated news headlines than Shatta Wale.

Stonebwoy’s troubles with Zylofon has been well reported in the last few weeks.
Sitting at the top was his altercation with Zylofon’s artiste manager, Bulldog, which resulted in Stonebwoy firing warning shots on the night of March 10, 2018.

Stonebwoy revealed that he fired the shots prevent Bulldog and some thugs from taking away his car.

This matter was discussed for days and despite it being related to violence, it still ensured that Stonebwoy dominated got Shatta Wale off the news headlines for some time.

And it’s not as if Shatta Wale himself makes the headlines for being an ‘angel’ so who cares?

2. Stonebwoy’s naming ceremony for his daughter:

The naming ceremony of Stonebwoy’s daughter, Catherine on March 17 dominated news headlines and relegated every other entertainment news to the background.

This has happened exactly a week after the warning shot incident and it was Stonebwoy all the way.

In fact, it trended beyond the weekend and made sure Stonebwoy’s name was mentioned more than Shatta Wale within the period.

A week after naming his daughter, Stonebwoy became the first Ghanaian artiste based in Ghana to have a song or an album appear on the US Billboard Chart.

This unprecedented feat maintained Stonebwoy at the top of the headlines despite serious attacks from Shatta Wale.

4. Photos of Stonebwoy hawking on the streets go viral:

After ending March on such high note, Stonebwoy has started April on a very good footing as well.

Photos of him hawking on the streets of Accra have been trending from Wednesday, April 4.

Though it started out as social media mockery as many people did not understand what was happening, it has become positive people got to understand that it was the concept for a new music video he was shooting.

And the publicity has been massive making Stonebwoy once again, dominate entertainment news headlines.